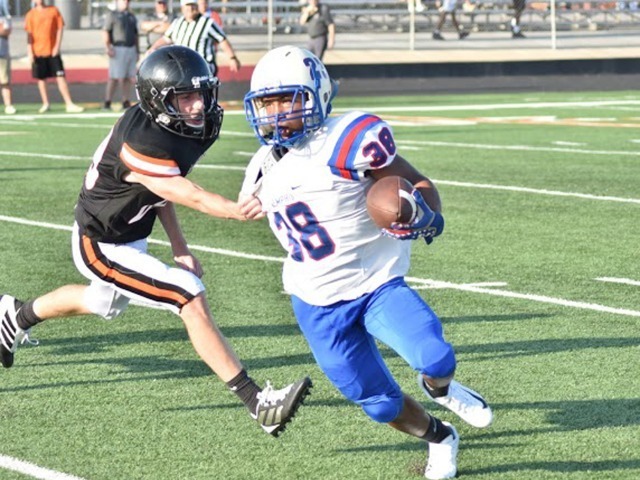 It was hot. One hundred-fifteen degrees worth on the field.

Believe it or don't, that's what Billy Elmore wanted.

As the heat reached its peak, sauna-like conditions disappeared. Just barely over an hour into Tuesday's scrimmage here a strong thunder storm moved through and ended the evening prematurely.

The Blue Devil offense scored the scrimmage's only touchdown with just under four minutes remaining in the first period of what was supposed to have been a full half of timed football.

"Actually, I wanted it to be hotter than it was when it ended tonight," said Elmore. "I wanted to condition us for next week because we start at 5 p.m. and it should be pretty hot at that time."

After several series of scripted offensive and defensive units on the field for both teams, starting with junior varsity, the Blue Devils and the Class 4A Pioneers readied themselves for some real football.

On their second offensive possession, the Blue Devils, under the guidance of senior quarterback Owens McConnell, marched 67 yards, capped by an 11-yard touchdown run by senior running back Cedric Loving.

Senior Colin Clark kicked the PAT for a 7-0 Blue Devil lead that stood up for the next few minutes before the storm clouds chased everyone out and referees signaled the end to the preseason skirmish.

"It is what it is," said Elmore. "God decided we'd played enough football tonight. It might have prevented an injury, so that's how it works out sometimes."

"I've been saying that Cedric has a chance to be an explosive runner for us this year," said Elmore. "He's got the ability to be one of the best we've had since I've been here."

Defensively, the Blue Devil varsity gave up very little in the two Batesville offensive possessions, but Elmore said that there were some of his defenders out of position.

"I told our coaches you gotta realize that several of these kids it was there first time out there in varsity situations," said Elmore. "We'll take it and get better and move on toward our first game."