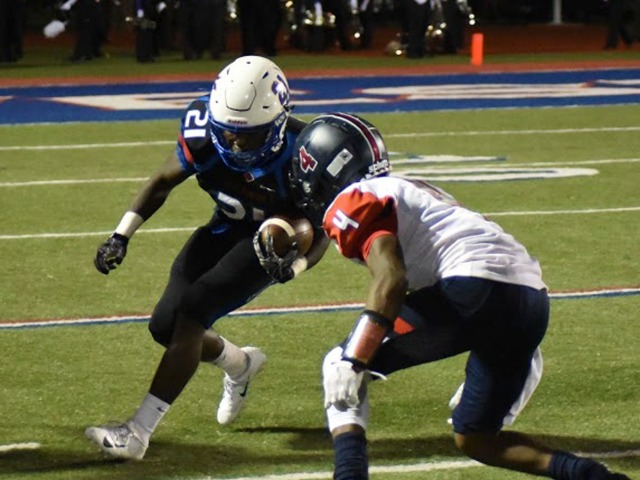 His eyes gazed all around the mayhem that surrounded Hamilton-Shultz Field. Senior offensive lineman Chris Morris had never played a football game before this many folks. He also had never played in a game with such an exciting ending.

"Oh my gosh...is this real?" Morris said, his eyes still rolling. "We gotta be dreaming brother. Is this...oh my gosh. I'm amazed right now y'all."

The play has a name, but West Memphis Blue Devil coaches are sworn to secrecy for some reason.

Today, they can just call it Give It To The Big Fella.

Morris, a first-year Blue Devil, lined up at offensive tackle, took a swing pass from quarterback Owens McConnell and then proceeded to steamroll through two Marion defenders for a two-point conversion in overtime which gave West Memphis a most improbable 41-40 victory over its Crittenden County rivals on Friday night.

How the Blue Devils did it, surely some of their fans don't even know.

They very nearly got run right out of their own stadium in the first half.

Marion rushed for 185 yards and took a 20-6 haltftime lead, surely leading the Marion faithful to think this was their year to finally break through after 15 straight losses without a win against the Blue Devils.

And it wasn't just the number of rushing yards. It was how the Patriots did it.

Marion rides with its junior quarterback Daedrick Cail's right arm. He threw just two passes in the first half.

He didn't even have to.

Because the Patriots and running back Anthony Price just lined up and ran right through the middle of the Blue Devil defense and there was nothing the home team could do about it.

It set off a firestorm in the Blue Devil locker room at halftime, although head coach Billy Elmore would have you know it was mild.

Comparatively speaking, that is.

It took 12 minutes and 21 seconds for the Blue Devils (2-2 overall, 1-0 in the 6A-East Conference) to take their first lead at 26-20 on McConnell's second of three touchdown passes, this one to Cedric Loving.

Then, they came within two minutes of running enough time off the clock to ensure a victory.

That's when McConnell, a sure-to-be goat, became the GOAT.

Nursing that 26-20 lead inside five minutes to play in the fourth quarter and after just having crossed the 50-yard line, McConnell was wild high on his pitch to Loving on a sweep play.

And Marion's Dylan Chappel scooped up the fumble and returned it to the West Memphis 23.

"The air went out of the stadium," McConnell said afterward.

Cail responded on the first play following the fumble with a 23-yard TD strike to sophomore Kaleb Catt, a transfer from the West Memphis School District, the starting catcher on the Blue Devil baseball team just last spring.

Dylan Pieri then kicked the PAT for a 27-26 Marion lead with 4:27 to play in regulation.

If that wasn't enough to damper Blue Devil hopes, what happened next surely doused all of it.

McConnell threw a pick-6 with a mere 1:48 to play. Not much was made of the Blue Devils blocking the PAT, making the score 33-26, but had the kick split the uprights, it would have been game over.

The Blue Devil signal caller just refused to call it a night however, even though he had every reason to.

Starting on their own 20 with zero timeouts left, McConnell connected on two short passes against the Marion prevent defense to get the Blue Devils to the 41.

A key facemask penalty on Marion against McConnell may have won the game for West Memphis because it came on an incomplete pass on fourth down.

But it gave the Blue Devils an automatic first down to the Marion 49 with 54 seconds to play.

On third and four, McConnell lofted a perfect pass over the Patriot defense and into the soft hands of J'Marious Rodgers, who outran all defenders for a touchdown with 18 seconds left.

"You've got to have short-term memory when you're playing any kind of sport," McConnell explained. "We still had time. It wasn't like the game was over or anything. That (interception) was a bad play on my part, but I mean I just gotta do what I've gotta do for my team. I wasn't just going to go to the sideline and break down. We still had time left on the clock to score."

After originally deciding to go for the win in regulation by going for a two-point conversion, a Blue Devil procedure penalty negated that thought, which brought on placekicker Colin Clark, who sent the game into overtime with the PAT.

Game tied 33-3, the Patriots got the ball first in overtime and they wasted no time replicating their last offensive touchdown when Cail hit Catt on the same play for a touchdown.

Pieri added the extra point for a 40-33 Patriot lead.

West Memphis' OT possession was not at all promising when McConnell faced fourth down from the 3.

But once again the senior quarterback, who completed 16 of 32 passes for 300 yards, threw over the Marion defense again, this time to tight end Jaylen Shephard for the touchdown.

On the play, a Marion defender was down on the sideline suffering from cramps. It took two to three minutes to tend to him, which gave the Blue Devil coaches enough time to decide two things:

1. Whether to go for the tie, sending the game into a second OT.

2. Which play to call for the two-point conversion.

"I actually had to argue with the official to buy us time on the fourth-down play," Elmore admitted. "I told the coaches on the headsets that I was going to argue with that call to give us time to think about it. On the two-point call, we were actually going to use that play before we got called for procedure. We practice that play almost every day for Chris Morris. He knew what to do with it once he caught it."

Blue Devil fans flooded the field after Morris crossed the goal line, setting off an epic celebration to an epic chapter in the Marion-West Memphis series.

"I don't see how there's any better than this," Elmore added. "It's got to be one of the closets, no question."