SEARCY'S LIGHTNING-QUICK OFFENSE TOO MUCH FOR BLUE DEVILS 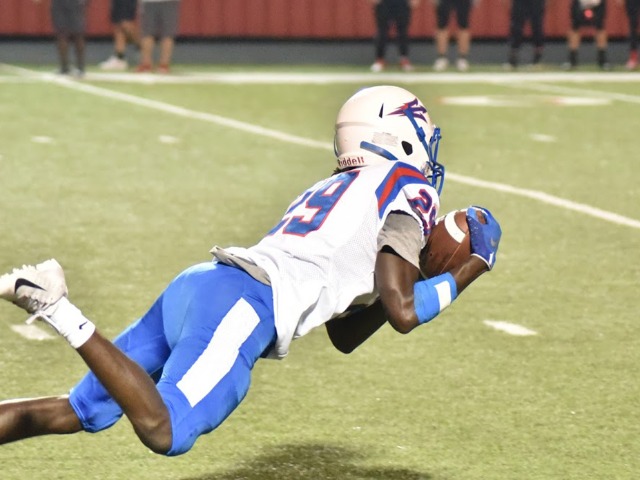 Searcy's frantic pace was too much for the Blue Devils as the Lions scored a 51-24 victory, but the pace was also too much for its own offense at times as four procedure calls on its first two possessions attest.

Not only were the Lions fast, but their sleight of hand was perfect. Searcy forced four West Memphis turnovers and suffered none themselves.

"This was a pretty typical pace for what we do," said Searcy head coach Mark Kelley, whose team improved to 5-0 overall and 2-0 in the 6A-East Conference. "We do two things once one of our plays is over. We make sure we get lined up and into our formation. We did a good job getting there, but we had a few penalties when we got in to big a hurry."

Searcy quarterback Bryce Dixon completed 5 of his first 8 passes for 63 yards and a touchdown on the Lions' first possession, and from there Dixon had his way with the West Memphis secondary.

The Blue Devils (2-3, 1-1) never laid a glove on Dixon due to his quick release and the secondary was peppered with intermediate routes with a couple deep passes thrown in for good measure.

Two Dixon TD passes gave the hosts a 14-0 lead before the Blue Devils got things going on offense.

Quarterback Owens McConnell, who was 15 of 30 for 167 yards and three interceptions, engineered a 58-yard touchdown drive that was culminated by him connecting with Jamual Crayton on a 8-yard scoring strike with 1:20 left in the first quarter.

The Blue Devils were actually within shouting distance of the Lions for the entire first half, although the hosts took a 34-21 lead into the lockers at halftime.

Cedric Loving scored a 1-yard touchdown with 7:38 to play in the first half and then added a 13-yard TD with just 16 seconds left in the second quarter.

The difference in the game, however, came down to four West Memphis turnovers, three of which turned into Searcy touchdowns.

"You can't beat anybody doing that, especially good teams," Elmore stated. "We put ourselves in bad situations, and (Searcy) just continued to score."

It was all Searcy in the second half.

The Blue Devils failed to take advantage of the first possession of the second half, and they proceeded to get shut out the rest of the way.

All the while, the Lion offense moved at a breakneck pace.

It's time to reevaluate, according to Elmore.

"We're going to go to work on fixing this," he said. "We haven't shown the ability to fix it 100 percent yet. We have fixed it at times, in flashes. At a certain point you have to start evaluating effort, and not necessarily potential. We may set playing time according to those things now. Quite honestly, if some of the older guys aren't giving the effort, we may start looking at some younger guys that are giving that effort. I think you'll probably see some of that going forward."