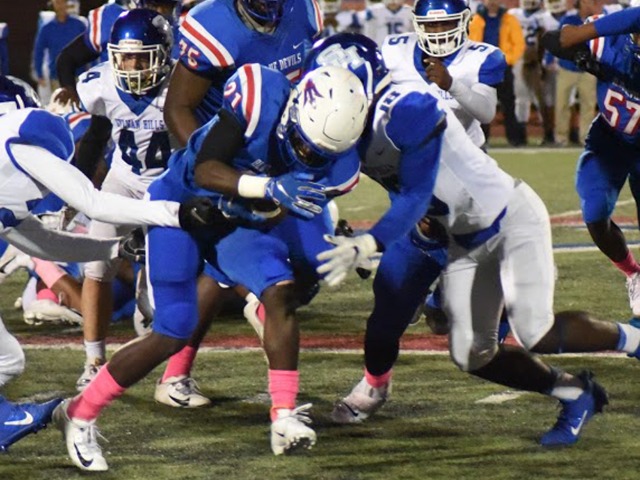 With league-leading Jonesboro on the horizon, the West Memphis Blue Devils could have considered Friday night's clash against Sylvan Hills as a swing game.

Win and you look at the next game, at Jonesboro, as a huge opportunity, which would put you in position for a top two-position for 6A-East standings with a win.

Lose, and it puts you behind the 8-ball.

The Blue Devils dug themselves a 21-0 hole in the first half, then enjoyed an electrifying spurt in the second quarter only to see their offense flatten out in the second half as Sylvan Hills went on for a 31-23 victory at Hamilton-Shultz Field.

The loss drops West Memphis to 2-4 overall and 1-2 in the 6A-East Conference heading into the game at Jonesboro, which overpowered Pine Bluff 37-14, next Friday night.

"We haven't been able to get this fixed yet," he stated. "Right now it's just not good football. There's no other way to describe it."

The biggest factor in the last two losses has been turnovers. West Memphis' offense has turned it over seven times in the last two games and five of those miscues have been converted into touchdowns. The third turnover against Sylvan Hills came in the third quarter and it turned into a Bears field goal.

The West Memphis turnover ratio is 7-1 in the last two games.

Against Sylvan Hills, the Blue Devils turned it over twice in the first half, and it ended up being the difference in the end.

"Just one mistake after another," Elmore commented.

Despite the early three-touchdown deficit, the Blue Devils put on a fierce rally in a short burst of time in the second quarter to cut the Bears' lead to 21-20, which turned out to be the halftime score.

Which was all good for Blue Devil faithful, which have seen their team play mediocre in the first half, but turn it around in the second half and play much better.

Not so this time.

The West Memphis ground game, which was held to 35 yards in the first half, was even worse in the second half, going for only 21 net yards.

Meanwhile, the Blue Devil defense couldn't stop the Sylvan Hills rushing attack. After giving up 142 first-half yards on the ground, the Blue Devils had to change their look in the second half just to slow down the Bears.

"We went to a cover-zero look in the second quarter and didn't even play with a safety," said Elmore. "We felt like we had to do that to slow down the running game."

After allowing Sylvan Hills to rush out to the 21-0 lead at the 8:52 mark of the second quarter, the Blue Devil offense found renewed life.

The spark came from a 34-yard pass completion from quarterback Owens McConnell, who was 12 of 25 for 163 yards with one interception and one touchdown, to Nathan Watson.

It gave the Blue Devils a first down at the Sylvan Hills 29.

McConnell then rushed for a 2-yard touchdown to make it 21-7 after Colin Clark's PAT.

The Bears' lone turnover came on a fumble, which was recovered by West Memphis' Terry Carter at the Sylvan Hills 35.

On West Memphis' next possession, Cedric Loving, working out of the wildcat formation, scored a 7-yard touchdown, giving the Blue Devils all the momentum going into halftime.

But the Blue Devil offense went stagnant in the final two quarters, while the Bears got a second TD from sophomore quarterback Corey Washington and a 36-yard field goal from Matthew Riley.

West Memphis' only points in the second half came on a 25-yard field goal from Clark.

"You can't get in a hole to anybody in our league like we did," said Elmore. "The disappointing part was we fought back, but we missed some opportunities in the second half. Seems like right now we're finding a way to lose instead of finding a way to win."