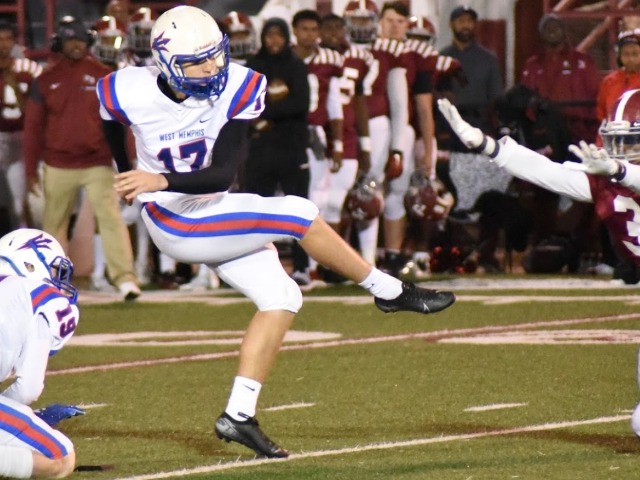 The West Memphis offense is still grab-bagging, but the defense came to the rescue on Friday night at Torii Hunter Field.

A triumph means a ton for the Blue Devils and their postseason hopes.

And would you believe the team still has a chance for a share of the conference championship?

A Sylvan Hills win over Searcy, a Blue Devil win and a Marion win over Jonesboro would mean a tie for the league crown with Searcy, although the Lions would still get the conference's No. 1 seed for the state playoffs.

It was the third straight win for the Blue Devils (5-4 overall, 4-2 in the conference).

Since the team's 24-21 heart-stopping victory at Jonesboro, the West Memphis offense, which put up 42 points against Marion on Sept. 27, has been slowed in its conventional set-up. Thus, head coach Billy Elmore has relied heavily on quirks and different formations, and mostly to successful proportions.

However, the strong Pine Bluff defensive line and a well-scouted plan, nixed the Blue Devil machine on Friday night.

West Memphis rushed for just 55 first-half yards and only 54 in the second half, with 38 of it coming on a run by Cedric Loving, who lost a fumble at the end of the run.

West Memphis quarterback Owens McConnell had no open receivers to throw to all night, with Pine Bluff limiting the Blue Devils to 33 yards in the air in the first half and minus-4 in the second half.

"The offense was a slow go all night," said Elmore.

But his defense answered the distress signal, allowing just 34 yards rushing all night and getting a whopping five sacks from Davion Eason.

"The defense won it for us, no doubt," said Elmore. "When you shut out a team like Pine Bluff you've really done something. We did everything we were supposed to do."

To make up for the offensive deficiencies, the Blue Devils got two field goals from Colin Clark (from 25 and 32 yards) and a 38-yard punt return for a touchdown from senior Jamual Crayton.

West Memphis went into the locker room at the half with only a 3-0 lead on the strength of Clark's 25-yard field goal with 58.3 seconds left in the first quarter.

For an example of how tough the offensive yardage was for West Memphis all night, it took a key facemask call on Pine Bluff on the first possession of the second half, which rescued what looked like a stalled Blue Devil drive on third and 10 from their own 30.

Then a halfback pass from Loving to Elijah Eulls picked up 33 yards to give the visitors a chance at the Pine Bluff 18.

But once again, they were denied the end zone, bringing out Clark, who is gaining more and more confidence from his head coach as the season progresses.

Clark split the uprights from 32 yards to increase the Blue Devil margin to 6-0.

"He's done an outstanding job," Elmore said of Clark. "Earlier in the year he missed a couple PATs that were worrisome for us, but now we feel like if we get inside the 20 it's automatic for him. There was no doubt we were going to send him out there tonight. He's been hitting the ball real good. That's what we expect out of him and that's what he does."

Although the Blue Devils wouldn't clinch the win until much later in the fourth quarter, they got the game's only touchdown when Crayton breezed untouched into the end zone from 38 yards out with 32.5 seconds left in the third quarter.

"I was going to fair catch it at first, but I saw Titus (Miller) got a good block and I saw nothing but green grass," Crayton said.

From there, the Blue Devils relied on Eason, who put up a career high in sacks and a season-high for any West Memphis defensive player this year.

"Wow, he had five sacks?" Elmore asked . "I didn't know that. But that's a huge number for one game."

Eason said the defensive game plan opened things up for his effort.

"We did a lot of stunting," he said. "Our wheel linebacker acted like he was (blitzing). It made the offensive guard block out, so I was free every time," Eason explained.

Once again, Elmore's offense threw the kitchen sink at the opposition. It worked to perfection against Jonesboro because there was no scouting report for it. But now it's not catching the opposition by surprise.

The Blue Devils started with its conventional spread with McConnell at quarterback, but on the second possession they went with a wing and wildcat formations, this time putting senior linebacker Kendarious Moore on offense for the first time in his career.

He gained 21 yards from direct snaps in the first half.

"We've got some stuff to correct on offense, but we'll spend time on it next week," said Elmore.