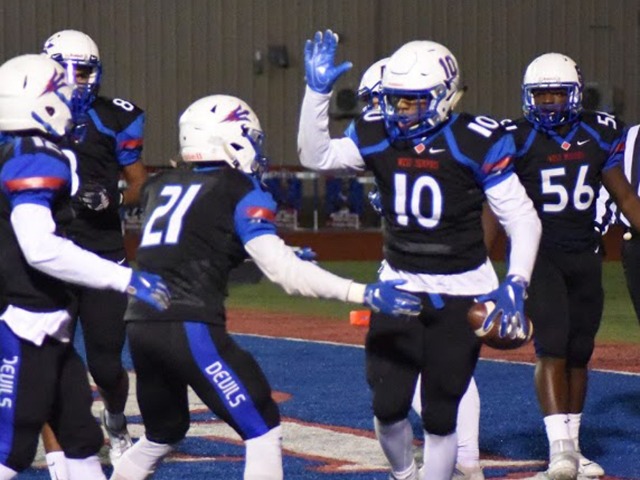 With winds whipping over 25 MPH and the wind chill at 29 degrees before the night was over, it was the Southern version of the Ice Bowl Thursday night at Hamilton-Shultz Field.

All that was missing was Jack Buck asking Jack Whitaker if he could have a bite of his coffee.

But it was all worth it for the victorious West Memphis Blue Devils, who overcame some worrisome moments in the first quarter to turn back the Mountain Home Bombers 33-7 in the regular-season finale.

And it turned out to be the best possible of all outcomes for the Blue Devils (6-4 overall, 5-2 in the 6A-East Conference). Down 19-7 to start the fourth quarter, the Marion Patriots put together a frenetic finish to defeat Jonesboro on Thursday night 34-25.

Marion's outcome gives the Blue Devils the second-place seed for the 6A state playoffs, and the first-round bye that goes with it. Marion, Jonesboro and West Memphis tied for second place in league standings, but the Blue Devils had the tie-breaker over both Marion and Jonesboro.

West Memphis will play the winner of next Friday night's first-round match-up between Sylvan Hills and Lake Hamilton, provided it loses to heavily favored Greenwood on Friday night. That quarterfinal game will take place on Nov. 22 at Hamilton-Shultz Field.

Playing a team that had lost its last 21 games, the Blue Devils had to overcome a trying first quarter that was dominated (at least in numbers of offensive snaps) by Mountain Home.

Mountain Home took the opening kickoff and kept the ball for 16 straight plays, chewing up just two or three yards at a time. But it not only kept the ball away from the Blue Devil offense, it also milked the clock.

After a missed Mountain Home field goal, the Blue Devils finally touched the ball with 24 seconds left in the first stanza.

And it ended tragically.

A fumbled exchange between quarterback Owens McConnell and running back Cedric Loving was recovered by the Bombers, who then took eight more plays to score the game's first touchdown.

Final tally on number of offensive snaps in the first 15 minutes and 11 seconds of the contest: Mountain Home 24, West Memphis 1.

"I almost felt like it was four years ago when we went to Mountain Home and they kept the ball the whole first quarter," said West Memphis head coach Billy Elmore. "What they do on offense, I hate playing against. But I give their coaches credit. They do what gives them the best chance to win. But they can keep the ball an awful long time."

However, the script totally flipped from there.

Over the remainder of the first half, the Blue Devils ran 23 plays to Mountain Home's 3.

In a span of 6:41 which ended the first half, the Blue Devils got three touchdowns from newly placed offensive back Kendarious Moore and two recovered pooch kicks to seize a 19-7 halftime lead.

"I'll tell you what part of that is," said Elmore. "When the wind is blowing like this and it's this cold, the kickoffs are harder to field. We work on this all the time in practice, and tonight it was executed perfectly."

In just the second quarter the Blue Devils put up 210 rushing yards while the bulk of Mountain Home's 74 yards on the ground came on that first drive.

Moore's first TD of the night, coming at the 6:41 mark of the second quarter was spurred by a 52-yard gain by Loving. Moore scored on runs of 12, 3 and 5 yards.

In the second half, the momentum kept building for West Memphis.

It scored on the first possession of the half, getting a 7-yard TD from Loving and then closing it out with a 17-yard touchdown pass from McConnell to Jamual Crayton with 5:16 left in the third quarter.

After an all-day soaking paved the way for a frigid front that moved in around 6 p.m., the game was affected by the weather. On more than one occasion, referees placed the ball down only to see it roll downfield before the teams could line up for a play.

"I may have coached in colder weather before, but not in a while," said Elmore. "The wind is what made it so miserable. But we played pretty well once we got into it."