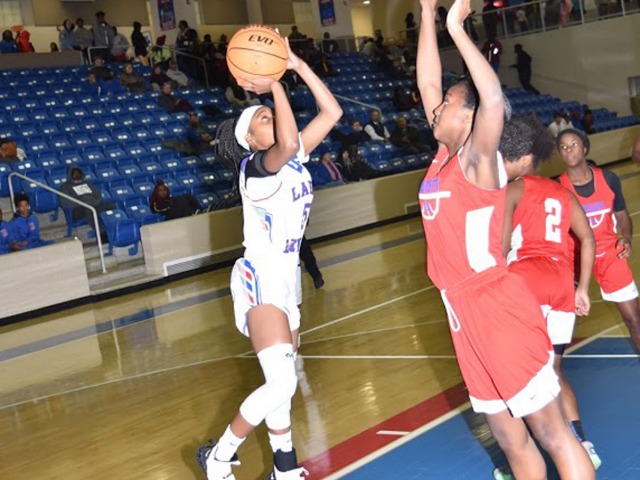 Shelia Burns' first game back on the Lady Devil bench as head coach was heavily punctuated by a lethal one-two punch from her backcourt.

Appropriately wearing Nos. 1 and 2 on their jerseys, the guard duo of senior Aryah Hazley and ninth-grader Janiya Tucker combined for 29 points as the West Memphis girls easily disposed of Bartlett 64-44 Tuesday night at Lehr Arena in a benefit game that will not count toward the regular season.

It was business as usual for Burns, back to coaching after missing last year due to a brain aneurysm and then fighting hard within rehab. The winningest coach and longest-tenured coach in Lady Devil history watched as her team dismantled Bartlett.

"(The players) knew what to do. I didn't have to do much," said Burns. "I thought they really played team ball."

And most of it centered around the two girls doing most of the ball-handling, Hazley and Tucker. Hazley, who like Tucker gained some high school experience playing as a ninth-grader, scored whenever she wanted, pumping in 13 points in limited minutes.

Unlike Tucker, however, Hazley's ninth-grade experience came only when her junior high season ended in February 2017. In her first game in state tournament play Hazley pumped in 29 points in a West Memphis win over Sheridan.

Tucker is getting her high school career off the ground immediately as a ninth-grader and she did not disappoint in her debut. The lightning-quick 5-foot-3 guard swished through a game-high 16 points.

It was all Tucker and Hazley in the early going as the pair assisted or scored on West Memphis' first 23 points of the game, covering all of the first quarter and the first 1:20 of the second quarter.

The Lady Devils breezed to a 19-6 lead at the end of the first quarter and then stretched it to 27-9 by the 4:31 mark of the second quarter after a pair of free throws from senior Jamee Gholson, who scored 11 points.

As Burns began subbing fairly early in the second quarter, the Lady Devils clung to its big lead and eventually took a 33-18 lead into halftime.

With a lead of 56-28 at the end of the third quarter, the Lady Devils needed only two more points to employ the mercy rule, which they did in the opening minute of the final stanza.