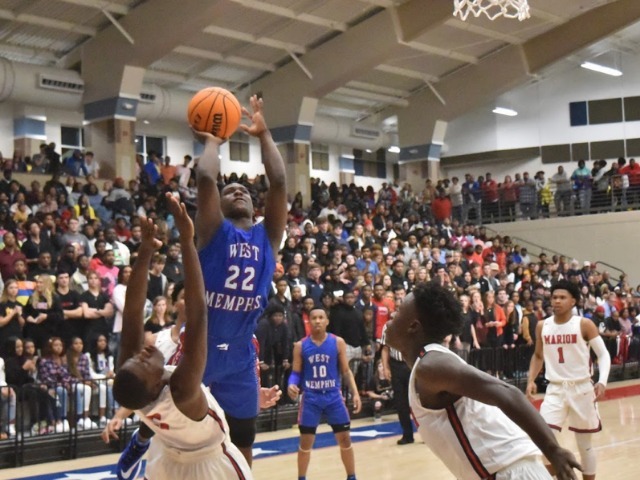 After winning seven in a row over Marion the previous three seasons, the West Memphis Blue Devils were swept by the eventual state champion Patriots last year.

The Blue Devils were ready for Marion this time.

With superstar Chris Moore playing out of position on the perimeter all night, the Blue Devils got a solid game from senior guard Immanuel Hoard and dominated Marion on the glass as West Memphis outlasted the Patriots 52-43 Friday night at Patriot Arena.

In winning their fourth in a row, the Blue Devils controlled the game most of the way and they would have run away from the Patriots if not for the play of Marion senior guard Detric Reeves, who continued to torch West Memphis with a game-high 23 points.

In five previous games against West Memphis, Reeves had averaged 21 points per game.

West Memphis got 15 points from Hoard, including three 3-pointers, and the visitors outrebounded Marion 34-18 on the night.

"I'm very very happy with the way we played tonight, particularly the way we defended and rebounded," said Blue Devil head coach Marcus Brown. "Our ball movement and our pace on offense was a little stagnant, but we made up for it."

Moore, usually unstoppable in the low post, didn't get many touches in the paint area as Brown said he placed the Blue Devil standout on the perimeter "so he wouldn't wear himself down."

It resulted in only a 9-point performance from Moore, who has been held to under double digits in the last three meetings with Marion. But the 6-foot-7 forward dominated the glass with a game-high 17 rebounds, 5 blocks and 3 assists.

Moore got 7 of his points in transition in the first half and he was held scoreless in the second half until he tipped in a missed shot with 35 seconds to play to give the Blue Devils (11-3 overall, 1-0) a 50-40 lead.

That left the door open for Hoard, West Memphis' best outside shooter.

"That's what Immanuel does, he hits some big shots for us," said Brown. "He missed a few tonight that he normally makes, but that's the way it goes in big games like this."

Although the crowd size was enormous and the fire marshall cut off ticket sales, turning some fans away at the box office, the Marion fans were less engaged in both the girls and the boys varsity games.

Nevertheless, the action on the court was heated.

But the Blue Devils' well-rounded attack was too much for Marion.

Although the Blue Devils made less than 50 percent of their shots from the field (20 of 47), the Patriots were far worse, connecting on just 17 of 5-0 for the night (34 percent).

"We defended well all night," said Brown, who put one of his worst defenders, Kylan Sykes on Reeves. "Reeves got his points, but we were in his face all night. As usual, he made some tough shots. Every shot he made, though, he had to earn it."

West Memphis' lead was cut to 33-31 after a three-pointer by Marion's D.J. Johnson with 4:20 to play in the third quarter. But the Blue Devil lead was never under three the rest of the way.

"I thought our bench production was good, and we cheered for one another all night long," said Brown. "I put Chris out on the perimeter because I didn't want a lot of wasted energy. Believe it or not, he left a lot of other people open for us."

With Marion trailing only 43-40 with 2:24 to play in the game, the Blue Devils scored the next 9 points to cinch the outcome.

Jordan Mitchell also scored 9 points for the Blue Devils while Xavier Warren had early success on his way to a 7-point game and Sykes hit for 6.

The Blue Devils play again at home on Tuesday against Searcy.