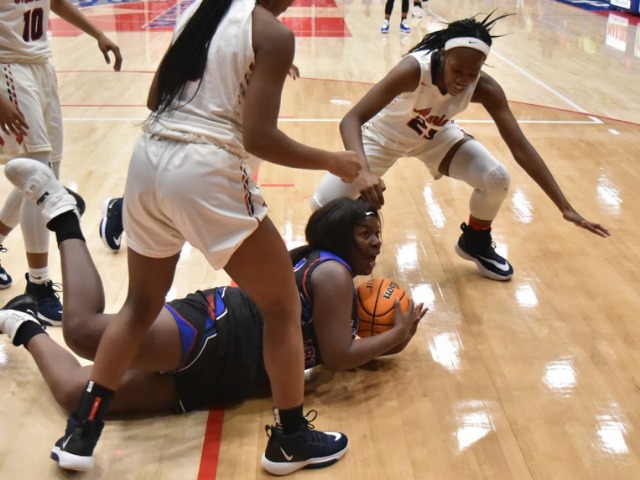 owered by their diverse guard play, the West Memphis Lady Devils kept threatening all night to create some distance between them and the Marion girls.

1. She sent enough defenders back to defend against those long outlet passes from West Memphis senior center Tiera Bradley that were leading to easy layups.

2. She bottled up Lady Devil guards Aryah Hazley and Janiya Tucker from penetrating in halfcourt sets.

And then just as that strategy seemed to put Marion in position to win, it left open West Memphis' inside game.

Bradley, all 6-foot-2 of her, stuck back a missed shot with 5 seconds left to give the West Memphis girls a 50-48 victory on Friday night at Marion.

Bradley trailed a play that saw Lady Devil guard Hazley miss a contested layup after Marion's Jala Henderson tied the game 48-48 on a mid-range jumper with 15 seconds to play.

As usual, when Bradley gets the ball deep in the low post she is nearly impossible to stop.

"Something told me to go down and trail the play," said Bradley, who scored only 4 points. "I just saw the opening for the put-back."

The Lady Devils (11-3 overall, 1-0 in the 5A-East Conference) bolted out to a 23-11 lead in the second quarter against Marion (7-9, 0-1) largely due to the West Memphis guards releasing on Marion missed shots. Bradley's strong-armed outlets led to easy Lady Devil layups.

But Johnson's adjustments brought the Marion girls back.

"I was on the girls the whole second half," explained West Memphis head coach Shelia Burns. "We played so good the first half, but we didn't come out strong in the second half."

The Lady Devils led 32-24 with 4:46 to play in the third quarter, but they committed 16 of their season-high 26 turnovers in the second half, which allowed Marion to come back.

Marion went on a 10-0 run near the end of the third quarter to take a 34-33 lead and the Lady Devils trailed 38-35 heading into the fourth quarter.

Down 46-45 with inside a minute to play, the Lady Devils got a crucial steal from Hazley, who scored 13 points, and Marion was called for an intentional foul on her way to the basket.

Hazley missed the first free throw, but made the second. Then Hazley went back door for a layup with 35 seconds to play to give the visitors the lead again at 48-46.

That left the door open for Marion's Henderson to tie the game with her 15-foot jumper with 15 seconds to play.

Bradley was just in the right place at the right time when it mattered most.

"I was blocked on the play, and I thought Aniya Dean was the one who made the winning basket," said Burns. "But T-Baby always seems to be hanging around the basket at the right time."

Tucker led all scorers with 15 points while Terikal Inmon added 5 for the Lady Devils.

Keiana Delaney and Joi Montgomery each had 11 points to lead Marion.