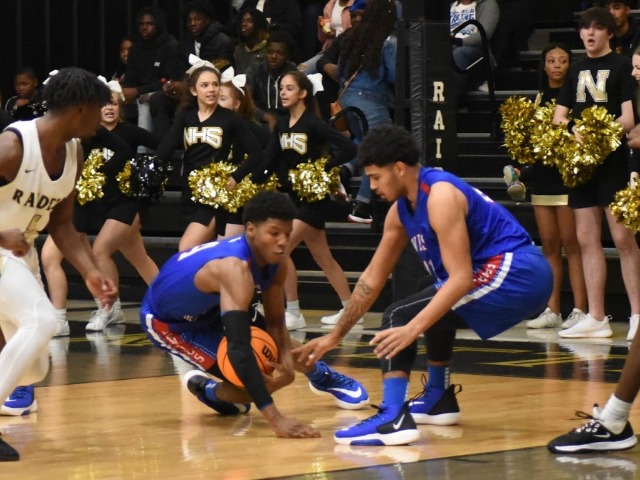 Jordan Mitchell swooped in near midcourt and swiped the ball from Nettleton's Taybin McCollough and had a wide open lane to the basket on the other end. As he cuffed the ball in his left hand, the West Memphis bench rose in anticipation of a thunderous dunk.

Instead, Mitchell laid the ball softly in for the bucket.

Mitchell turned that same trick again on the next two Nettleton possessions, and both times did not disappoint, flushing the ball through the hoop.

Mitchell sat out last season as a sophomore, transferring in from Marion, and it's taken him a couple of months to settle into a rhythm.

But he has now found it.

"I told (Mitchell) before the game that this was the type of game where he could have a double-double," said West Memphis head coach Marcus Brown. "His patience was really good. We want him to be an outside threat and tonight he hit some shots that we feel real comfortable in him taking."

In the past, Hurricane head coach Wes Swift has had some success game-planning for Blue Devil superstar Chris Moore. Now, he must consider Mitchell, too.

"I think J-Mitch is coming into his own," said Brown. "We want him to be an outside threat and also a kid who can penetrate and dish inside. I think he's slowing down his process and it's just all coming together for him right now."

Mitchell went the entire first half scoreless, but turned on the jets in the third quarter, hitting a three-pointer with 6:54 to play in the stanza to get his spurt going.

By the time he was finished, he was mobbed by his teammates in celebratory fashion.

"The goal for me is to get a little better every game," said Mitchell. "We always preach one percent better every practice."

Mitchell teamed with Moore to overwhelm an overmatched Nettleton club.

Moore hit for game-high totals of 19 points and 17 rebounds to go along with 3 assists.

Rushing out to a 19-10 lead after one quarter, Brown subbed liberally to start the second quarter and it allowed the Raiders (3-11, 0-3) to creep into contention, trailing just 25-21 at halftime.

Committing a season-low 7 turnovers, the Blue Devils began operating on all cylinders in the second half.

Moore got it started with a short jumper and the team closed out the third quarter on a 19-2 run, giving the West Memphians a 54-31 lead heading into the final quarter.

The Blue Devils hit on 12 of their 16 field-goal attempts in the third stanza and ended the night shooting 58 percent from the floor (29 of 50).

With Moore controlling the paint on both ends of the floor, Mitchell running the show with precision and the team also getting various ways to score from Immanuel Hoard, Kyalan Sykes and Deon Williams, the Blue Devils are building steam as they eye March and the Class 5A state tournament in Russellville.

"We've been disappointed with the way the season ended for us the last two seasons,' said Brown. "Coach (Larry) Bray and (superintendent) Jon Collins have entrusted me with this program, so we're going to give it our best this year. I think the team is building toward the end of the season and we know there are still a lot of big games to play. We just want to take each of them as they come."

Hoard added 10 points for West Memphis while Akyrahn Hazley and Daveon Doolittle each scored 4 and Sykes hit for 3.