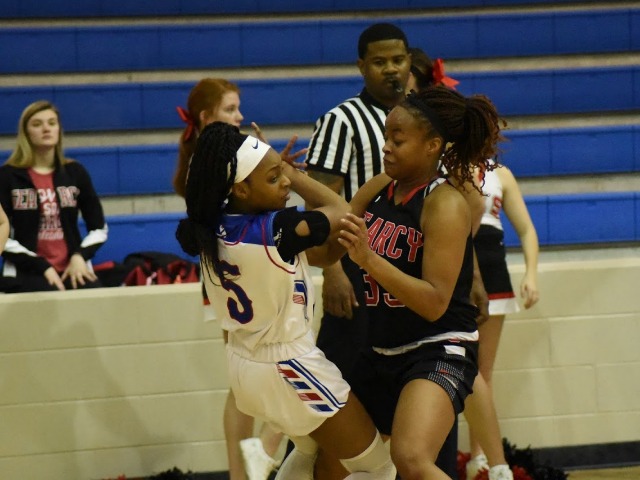 When the pressure is on in the late stages of a game, Lady Devils head coach Shelia Burns said her seniors aren't necessarily who she relies on.

Instead, she says, the most stable player on her roster is freshman Janiya Tucker, who put it all on display Tuesday night at Lehr Arena.

After Searcy trimmed what was a 17-point West Memphis advantage to 7 points in the fourth quarter, Tucker scored the Lady Devils' final 7 points to assure a 41-29 victory for the hosts.

"She doesn't feel pressure," Burns said of her ninth-grade point guard. "I think the seniors feel the pressure. I don't know what we'd do without Janiya."

The Lady Devils (12-3 overall, 2-0 in the 5A-East Conference) jetted out to an early lead thanks to some buzzer-beating shots to end both quarters in the first half. In the first quarter, Tucker, who along with senior guard Aryah Hazley led West Memphis with 12 points, nearly waited too long to move as the clock wound down. But she sank a 20-foot three-pointer just as the horn sounded to give the home team a 10-4 lead after the first quarter.

Senior Cortasia Hollins turned the trick to end the first half, hitting a deep trey to give the Lady Devils a 26-12 halftime lead.

"We have a play for that, but sometimes it never materializes," Burns said with a shrug. "That's what happened tonight."

As the Lady Devil lead ballooned to 32-15 at the midway point of the third quarter, the team's turnover issues crept into the picture. West Memphis turned it over 8 times in the final half, giving it 16 in a slow-paced game.

"I'm not happy about the second half," said Burns. "We have to learn to get back in the groove after halftime. We have to get better at that."

Searcy (5-9, 0-2) whittled the lead down to 34-27 with 5:38 to play in the game when Tucker sliced through two defenders for a three-point play which triggered seven straight points by the young Lady Devil standout.

The outburst pushed the Lady Devils to a 41-28 lead with just 2:30 to play, clinching the outcome.