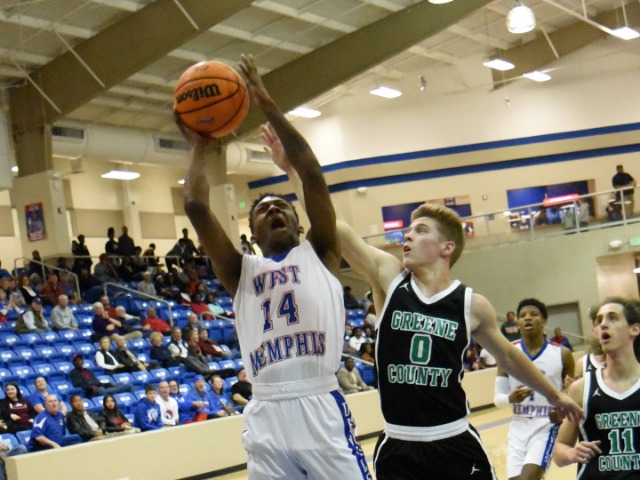 A year ago, the West Memphis Blue Devils were torched for 37 points by Greene County Tech point guard Zane Butler in an overtime win at Paragould.

Needless to say on Tuesday night at Lehr Arena, the focus was on defending Butler.

Using a trio of players on Tech's high-scoring back-court man, the Blue Devils held Butler to just 4 points on their way to a 65-36 mercy-rule win over the Eagles.

West Memphis head coach Marcus Brown made sure he kept fresh bodies on Butler as he rotated Kyalan Sykes, Jordan Mitchell and Deon Williams on him.

"Defense was the No. 1 priority tonight...well, it is every night, but especially tonight," said Brown, whose team improved to 16-3 overall and 6-0 in the 5A-East Conference.

"I know Zane. He's a good kid and a really good shooter. We just wanted to make him uncomfortable and make him work for his shots. The three guys we worked with on Zane did a great job...everybody took on the challenge."

After hitting the first two points of the game a minute and 13 seconds into the game, Butler then hit a mid-range jumper with 1:09 left in the first quarter.

He went scoreless the rest of the way.

Butler's rough night shooting was only a microcosm of the kind of defense the Blue Devils played on the rest of the Eagles (14-5, 2-4). Greene County Tech shot a miserable 27.6 percent on 13 of 47 shooting from the field.

"It was a total team effort," Brown added.

On offense, the fast-paced Blue Devils forced their will on Tech, jetting out to a 13-2 lead with four baskets in transition. By the end of the first quarter, several Eagles players were gasping for air.

"A couple of times when Zane went out of the game I wanted to press," said Brown. "That's when we really turned up the tempo."

Although Tech rallied to slice West Memphis' lead to 15-7 after one quarter, the Blue Devils scored the first 10 points of the second quarter on their way to building a 34-12 cushion at halftime.

In the second half, senior forward Chris Moore dunked four times from a flat-footed stance to bring the Eagles to the brink of mercy-rule status. Moore had 16 points, 8 rebounds and 6 assists in only three quarters of work.

"The big man did his thing tonight," Brown said succinctly.

Senior Jaylon Lewis came off the bench to score 7.

West Memphis outrebounded Greene County Tech 28-18 and kept the turnovers down to just 10 for the game while forcing 22 Eagle turnovers.

The only facet of the game that the Blue Devils couldn't master was in the free throw department. West Memphis made just 7 of 16 charities.