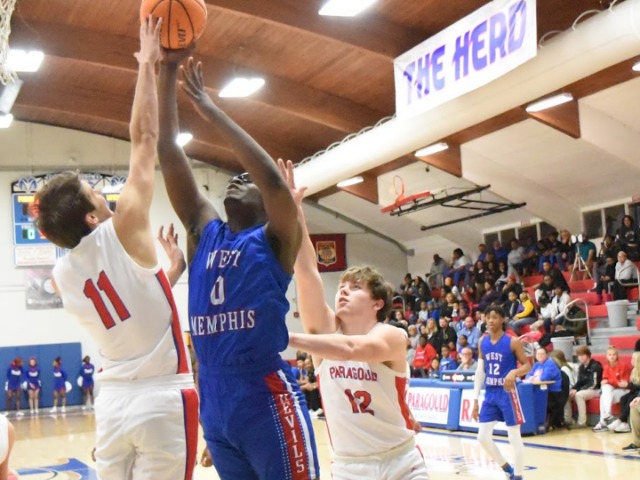 When it was over, the public address system played Sweet Georgia Brown, and there were eight or nine kids parked right outside the Blue Devil locker room awaiting autographs.

And all of it was appropriate, considering the West Memphis boys had just hammered the hometown Paragould Rams 79-23 here on Friday night.

The Blue Devils were the appointed Harlem Globetrotters, and the Rams played the role of the long-suffering Washington Generals.

The only thing missing was Chris Moore concealing the ball underneath his jersey.

The 56-point winning margin was West Memphis' largest in many years, maybe ever. And the Blue Devils did it with their starters playing no more than five minutes. Most of the damage was done by the third-teamers.

So, there was no use asking West Memphis head coach Marcus Brown what was the turning point of the game.

Instead, the attention was turned to the bench warmers, many of whom had not even gotten off the pines in a varsity game this season. And, honestly, it was really impressive watching the group work the offense with crisp, disciplined ball movement and slick shooting.

"I told those guys I'd give them a 97 or 98 grade," said Brown. "The second and third string, their ball movement was superb. They were patient, they ran the offense. We came here for business and we did all that we were supposed to do."

The Blue Devils (15-3 overall, 5-0 in the 5A-East Conference) jetted out to a 20-2 lead with the starters powered by three 3-pointers by senior guard Kyalan Sykes.

Then the reserves took over.

The rest of the first half included a mix of second- and third-teamers, who ballooned the lead to a gaudy 40-10 halftime count.

Starring for the reserves were juniors Kaleb Burns and Daylion Watkins. Burns hit two straight three-balls and totaled 8 first-half points on his way to a team-leading total of 13 for the game. Watkins tallied 10 points.

The Blue Devils finished a scorching 10 of 18 from three-point range with Burns and the rest of the reserves going 7 of 13.

"We were just trying to get those guys into a comfort zone shooting the ball and they certainly found a rhythm," said Brown. "Barnes and Watkins can play multiple positions and they can defend. We're senior-heavy this year, so we haven't had too many opportunities to prepare for next year."

Moore, the Blue Devils' leading scorer and rebounder watched and cheered from the bench for his teammates after a short night that produced the first two points of the game on a dunk.

Jaylon Lewis, a senior, finished with 11 points while Sykes totaled 9.

The conference-leading Blue Devils will play at home Tuesday night against Greene County Tech, a 76-63 loser Friday night to Marion.