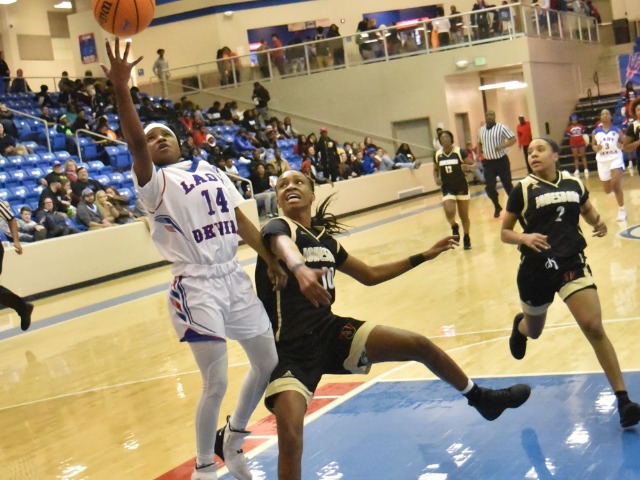 Seeking a signature win in conference play, the West Memphis Lady Devils relied on the confidence of one of their veterans to turn back Jonesboro 61-58 on Tuesday at Lehr Arena.

With the ball and the score tied 57-57 with under a minute to play, Lady Devils head coach Shelia Burns called timeout to set up strategy.

When the team went back on the floor, the plan was nixed in favor of resolution.

Senior center Tiera Bradley split a double-team and hit a highly contested layup with 45 seconds to play to give the West Memphis girls the victory.

"We wanted T-Baby to kick the ball back out to the guards," said a smiling Burns. "That's what we drew up during the timeout, but she said she could hit that shot."

Twenty-one seconds later, West Memphis' Jamee Gholson, who had missed two easy layups earlier in the game, drained the one that counted most to ensure the triumph.

It took a hot hand from senior guard Aryah Hazley, who hit six of the team's seven three-pointers on the night for a game-high 29 points.

"For us to win, Aryah has to shoot the ball," said Burns. "I got all over the team after the loss to Nettleton, and I think most of them heard me. Aryah told me she wasn't hitting (at Nettleton), and I said , 'I don't care. You gotta shoot. You're the shooter.' So she did."

Hazley wasn't the only hot shooter on the night. As a team West Memphis hit 7 of 15 from long range and 14 of 17 on the night at the free-throw line.

But it also took a solid defensive effort.

Just four days after being torched for 31 points at Nettleton by future Razorback Elauna Eaton, the Lady Devils faced another Division 1 signee in Jonesboro's Destiny Salary, who is headed to the University of Tennessee.

Salary could only manage 10 points against Burns' zone defense, which the Lady Devils stayed in the whole game.

"We had to know where she was all the time," Burns said of Salary. "We knew the way she was shooting the ball early, she wasn't hitting. So, the second half, I told our girls she wouldn't quit shooting. We just had to make sure we were up on her."

Although it may have appeared the Lady Devils were holding for the last shot, Burns said that was not the case. She said the team was in their "five-out" offense, which is designed to create layups or free throws.

It did create both a layup and go-ahead basket by Bradley.

The West Memphis girls also got 17 points from ninth-grader Janiya Tucker while Gholson scored 5 and Bradley and Terika Inmon each scored 4.

Jonesboro got 19 points from Ereauna Hardaway while Destiny Thomas scored 15.