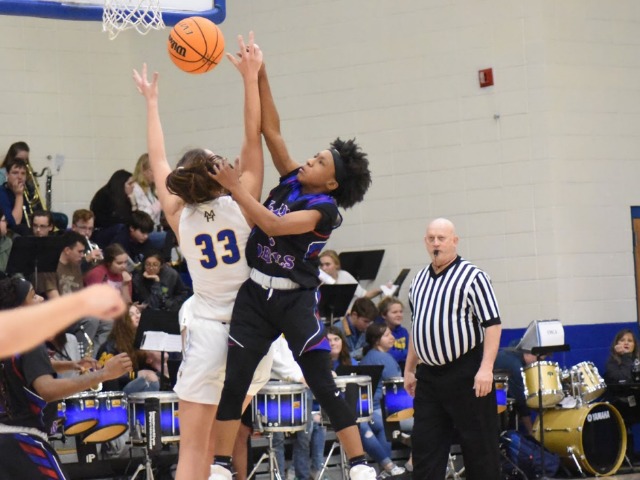 Tiera Bradley just has a knack of being in the right place at the right time.

There she was with the final seconds ticking off, waiting for the ball to fall into her hands. Her teammate, Janiya Tucker, missed a runner, but Bradley was there to grab the rebound and stick it back in with 1.9 seconds to play here Friday night to lift the West Memphis Lady Devils to a 35-33 victory over Mountain Home.

Before her heroics, however, Bradley was whistled for two travel calls late in the fourth quarter as the Lady Devils (17-4 overall, 6-1 in the 5A-East Conference) tried to protect a slim lead.

"Nothing bothers her, I swear," said a jubilant West Memphis head coach Shelia Burns. "She knew she shuffled her feet."

Bradley's comments after the game would indicate otherwise.

"Those were two bad calls that went against me," she said.

The victory by the Lady Devils breaks up what was a three-way tie for first place in the conference. West Memphis and Nettleton are now tied for the lead after the Lady Raiders drubbed Searcy 61-26 on Friday night.

The Lady Devils found themselves down by 9, 24-15 early in the third quarter, and it looked like the game may have been getting away from them.

But Tucker, who scored 10 points, scored a basket that ignited a 6-0 run to get the Lady Devils back in it before senior point guard Aryah Hazley drew her third foul with 2:46 to play in the stanza.

Bradley, who led her team with 11 points, stuck another miss back in later in the quarter to begin a 6-0 West Memphis spurt heading into the fourth quarter, that gave the visitors a 27-26 lead.

Tucker then sank two goals to give West Memphis a 31-26 lead.

After Bradley tied it 33-33 with a layup, the Lady Bombers were set to take the last shot of the game inside a minute to play. But guard Leah Jackson was called for an offensive foul when she pushed off her defender, Tucker.

"That's great because (Mountain Home) never turns the ball over," said Burns. "We got some points off their turnovers tonight."

That miscue gave the Lady Devils the final shot, which came from the opportune hands of Bradley.

"I just believed in myself and kept pushing through it after those two travel calls," said Bradley. "I kept thinking that Janiya was going to take the last shot because I have confidence she can make those kind of shots. I just got underneath and waited for a rebound in case she missed."

The Lady Devils won despite 17 turnovers in the slow-paced game. But the visitors outrebounded Mountain Home 25-20 and shot 43 percent to Mountain Home's 29 percent.

It was the first loss at home this season for the Mountain Home girls.

"I'm so excited for the girls," said Burns. "They played so good."

Addison Yates paced Mountain Home's attack with 11 points while Kate Gilbert and Martin had 8 and 7 respectively.