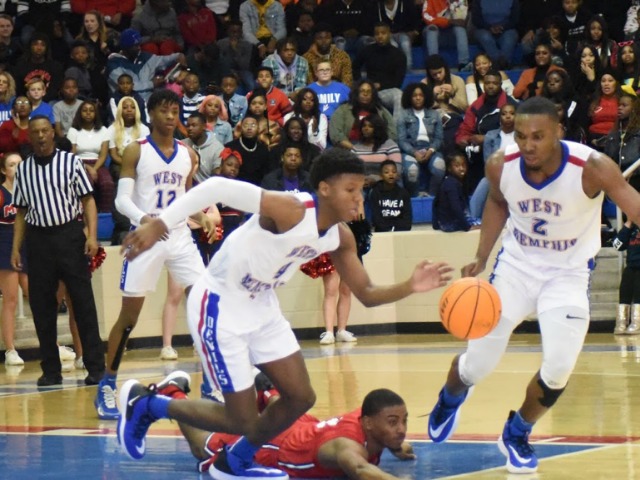 The West Memphis Blue Devils find themselves in a similar situation as last year when the team struggled with free-throw shooting.

With a chance to create some space between themselves and second-place Jonesboro in the 5A-East Conference, the Blue Devils suffered a dismal 9 of 21 effort from the charity stripe, while the Marion Patriots connected on 16 of 20 free throws.

"At this point of the season, we (as coaches) have done all we can do with free throws," said Brown. "Either the kids make them or they don't. It's just that simple. They have to step up there and just make them."

The loss was the first put on West Memphis (17-4 overall) in 5A-East play. It also snapped the Blue Devil winning streak at 10- games. Jonesboro, now 6-2 in the league, lost 51-44 at Mountain Home, still giving West Memphis first place all to itself.

However, the win put Marion (9-11, 5-3) back into contention in conference play.

Actually, it was just a miserable night shooting the ball for West Memphis overall. The Blue Devils made just 22 of 56 shots from the floor for 39 percent and only 2 out of 14 from the three-point arc.

"We just gave one away tonight," Brown said. "We actually auditioned tonight."

Although he was held under his season average, Marion high-scoring guard Detric Reeves, who torched Jonesboro for 40 points last week, scored a game-high 19 points, which included some tough shots with an array of Blue Devil defenders in his face most of the time.

"Give Reeves credit, but what we needed to do was stop everyone else on his team," said Brown.

The Blue Devils led just once in the game and it was very brief.

A Chris Moore dunk finished off a 9-0 Blue Devil run to give them a 44-42 lead with 57 seconds left in the third quarter, and it got the Lehr Arena crowd back in the game.

But Marion's Darrius Waterford, who scored 10 points on the night, drained a long three-pointer at the third-quarter buzzer to give the visitors a 45-44 lead heading into the fourth quarter, a lead the Patriots would keep the rest of the game.

"We lost sight of our rotation on that play," Brown stated. "We knew we wanted to rotate, but we didn't want to rotate and leave (Waterford) open."

The closest the Blue Devils came the rest of the way was 49-48 when Moore, who led his team with 15 points, stuck back a missed shot. He was fouled on the play, but couldn't convert the and-one.

Immanuel Hoard, who hit 6 points for the Blue Devils, sank two free throws with 29 seconds to play to make it a one-possession game at 58-55.

But West Memphis was called for an intentional foul on the ensuing possession and Waterford closed out the Blue Devils with two free throws with 17 seconds to play.

"We didn't play bad, we just didn't play with enough urgency and enough patience when we needed to," said Brown.

The Blue Devils travel to Searcy on Tuesday night.