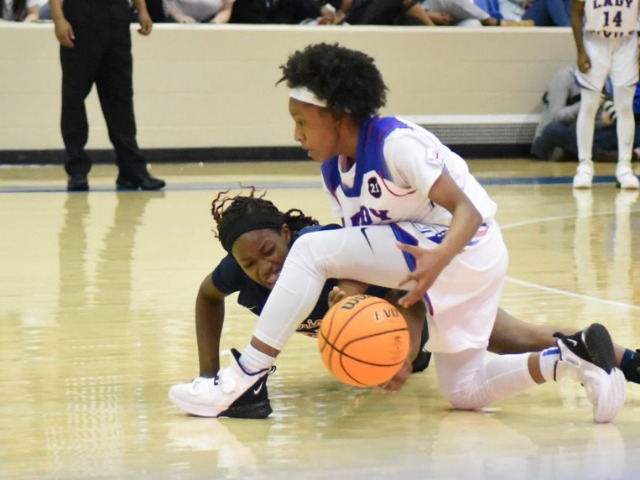 Three quarters of the way through her first year of high school basketball, ninth-grader Janiya Tucker has very few, if any boxes left to check off.

One of her many skills was at work on Friday night at Lehr Arena.

Tucker's composed posture was on full display as she scored 14 of her game-high 21 points in the third quarter to lead her West Memphis Lady Devils to a 50-32 victory over Marion.

High leverage moments in the game do not seem to deter Tucker. With hands in her face, Tucker scored several big baskets as the Lady Devils broke open a tight game.

A turn-around jumper in transition, leaving a Marion defender in total disarray, gave the hosts a 27-17 lead with 3:50 to play in the stanza.

"She had been struggling the last game or so, but she put on a show tonight," West Memphis head coach Shelia Burns said of Tucker.

Tucker and veteran backcourt mate Aryah Hazley scored all but 10 of the points for the Lady Devils (18-4 overall, 7-1 in the 5A-East Conference). Hazley pumped in 7 of her 19 points in the first three minutes of the fourth quarter, the last of which came on a three-point play with 4:42 to play in the game to give the West Memphis girls a 48-27 lead.

The big key for the Lady Devils in sweeping Marion was their 2-3 zone that was resurrected after a brief hiatus at Mountain Home.

"We had to play man-to-man at Mountain Home because of the way we match up with them, but we got back to the 2-3 tonight," said Burns. "Our girls are starting to understand the defense."

The victory keeps the Lady Devils in a tie for first place in the 5A-East with Nettleton, which overwhelmed Greene County Tech on Friday, 75-50.