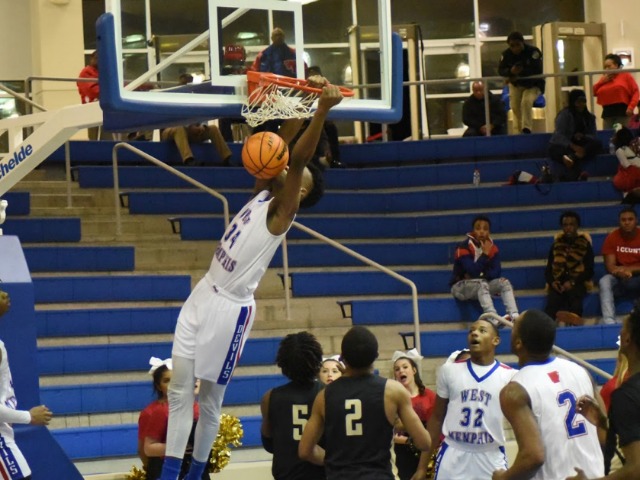 Moments after his team completed a second straight mercy-rule victory over Nettleton, West Memphis boys head coach Marcus Brown was asked how soon his team would start thinking about Jonesboro.

With the Hurricane looming on Tuesday night in Jonesboro, Brown calmly suggested the Blue Devils would wait until Sunday to start focusing on Jonesboro.

That's because Brown had already been informed that Greene County Tech had done his squad a huge favor in upsetting the Hurricane on Friday night 73-54.

So, after West Memphis' 62-29 win over Nettleton, the Blue Devils (19-4 overall, 9-1 in the 5A-East Conference) own a two-game lead over second-place Jonesboro and Marion, both of which are tied with 7-3 records.

Still, the game at Jonesboro on Tuesday night will be big in West Memphis' plans to win the 5A-East title. The Blue Devils edged past the Hurricane 47-43 last month at Lehr Arena.

Senior forward Chris Moore scored 10 of his game-high 21 points in the first quarter as the hosts built a 20-11 advantage after the first eight minutes.

"I thought we imposed our will tonight," said Brown. "Good vibes all the way around tonight. It was a feel-good win."

The Blue Devils seized a 37-18 lead at halftime and from there they never let up.

"We did a good job on defense," said Brown. "Nettleton's got a young team with a couple of good players. You'll see those guys 18 months from now and they'll be a lot better than they are now."

The Blue Devils took good care of the ball, turning the ball over only 11 times and also outrebounding Nettleton 36-24. Moore led the rebound charts for the Blue Devils with 15 boards.

Akyrahn Hazley added 9 points for the Blue Devils, who played without starter Immanuel Hoard, who was ill, while Jamaul Crayton came off the bench for 7 points and Jordan Mitchell hit 5.

The Blue Devils have four games in the final two weeks and Brown said his team must narrow its focus.

"I want to make sure everybody on the team is in tune with what we're doing" said Brown. "I want the ball movement to be good. We also need to get better at feeding the post and fine-tune our defensive rotations."