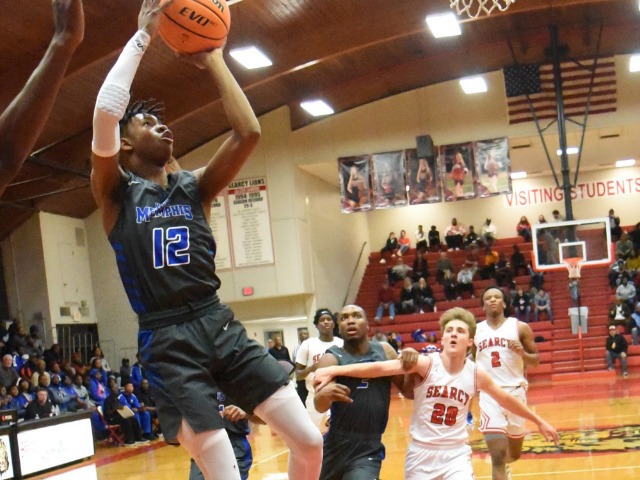 After suffering their first loss in conference play, the West Memphis Blue Devils didn't exactly have a cake-walk scheduled for Tuesday night.

Searcy, perhaps the most under-rated team in the 5A-East Conference, is in the midst of fighting for a state tournament berth and armed with one of the best players in the league and/or state in senior swingman Freddy Hicks.

And in a twist of ironic proportions, the game came down to free throws, which hasn't been the Blue Devils' forte' this season. Once again, the opponent was deadly from the free-throw line and West Memphis was...well, let's just say it was good enough.

After clanking free throw after free throw in the loss to Marion last Friday night, the Blue Devils connected on 7 of 10 charities in the final minute to hold off a Searcy club that saw Hicks swish 18 straight free throws before a final costly miss.

"Seven out of 10, I'll take that," said a relieved Blue Devil head coach Marcus Brown. "A win is always good in a hostile environment."

Hicks very nearly won the game for Searcy all by himself.

The still unsigned Division 1 college prospect scored a game-high 33 points, scoring all but 21 of his team's final total. And it seemed he'd never miss from the free-throw line, until he did when it counted most.

With Searcy (10-11 overall, 5-4 in the 5A-East Conference), trailing 56-51 with 18 seconds to play, Hicks was sent to the line. He drained the first free throw, but with a chance to make it a one-possession game, Hicks missed the second free throw.

"Freddy's a tremendous player," Brown said. "He does some tremendous things on the court for (Searcy)."

Surely the book is already out on the Blue Devils. Foul them in the final minute.

This time, Searcy began its hacking at exactly the one-minute mark, and sending Immanuel Hoard, Jordan Mitchell and Deon Williams all to the foul line.

The trio made the 70 percent mark on 10 attempts, with Williams icing the game with two drained shots with 4 seconds left.

The Blue Devils got big numbers once again from Chris Moore, the Auburn signee, who had 17 points and 16 rebounds.

"For the most part, I thought we played hard, but not necessarily smart," said Brown. "I think we missed the Big Fella (Moore) inside and the ball was just three or four passes and we try to score. Instead, of 8 or 10 passes and hitting Chris inside."

Outrebounded only twice this season, the Blue Devils once again won the battle of the boards, snaring 24 rebounds to Searcy's 18.

West Memphis also got 12 points from junior point guard Mitchell while Hoard and Kyalan Sykes, who drained a clutch three-pointer with two minutes to play in the game, added 8 apiece.

Searcy got an additional 8 points each from Griffin Love and Braden Watson.