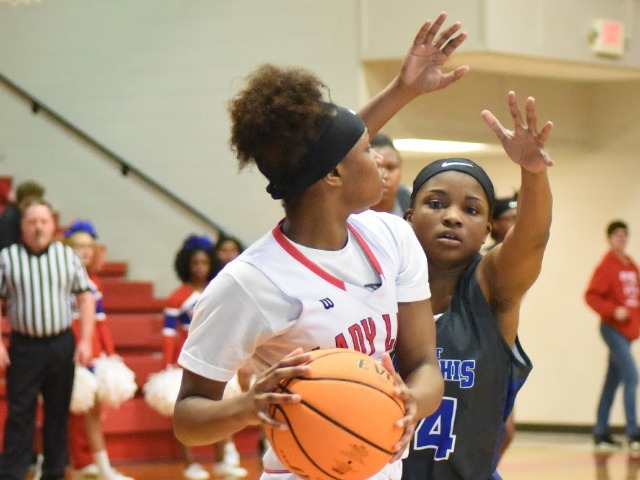 With their eyes on an all-important date on Friday for first place in the 5A-East Conference, the West Memphis Lady Devils very nearly let one get away from them here on Tuesday night against a team that had not won a league game all season.

Some late heroics from ninth-grader Janiya Tucker, however, propelled the Lady Devils to a 50-43 victory over Searcy.

The win pushes the West Memphis girls record to 19-4 overall and 8-1 in the 5A-East. Awaiting them on Friday at Lehr Arena is Nettleton, which defeated Marion Tuesday night 77-60. Last month, Nettleton handled West Memphis 67-46 behind 31 points from University of Arkansas signee Elauna Eaton.

Both teams are tied for first place in the conference standings.

The Lady Lions (5-16, 0-9) took a fourth-quarter lead before West Memphis guards Aryah Hazley and Janiya Tucker, who scored 17 and 14 points respectively, made the plays down the stretch.

Down 43-40 with 2:05 to play in the game, Hazley converted a three-point play on a stickback. Then, perhaps the play of the game, Tucker split two defenders on her way to the basket for a twisting, off-balance layup to give the visitors the lead for good with 1:03 to play in the contest.

"The lane was open," said Tucker, matter of factly. "I wanted it to be opened up because I'd already made my move."

Tucker was hardly finished, though.

After Searcy called an immediate timeout after Tucker's basket, the impish West Memphis guard created a scrum for the ball once it got past halfcourt. As soon as she gained possession while sprawled on the floor, Tucker called timeout and was awarded it.

"I think her defense was the best part of her game tonight," West Memphis head coach Shelia Burns said of Tucker. "Janiya just has a knack for making the plays at the end."

Still not through, Tucker was fouled 13 seconds after she gained possession for the Lady Devils. She split a pair of free throws, but it was still only a one possession game with 27.1 seconds left.

A Searcy turnover then led to two free throws by Hazley with 13 seconds left to seal it.

Despite a 29-20 halftime lead, the Lady Devils couldn't make Searcy go away.

The Lady Devils committed eight of their 16 turnovers in the third quarter to let the Lady Lions back in the game.

Burns, however, made the adjustment on the bench to get it all back together for the Lady Devils.

"I took all the bigs out and went small," said Burns. "We needed the ballhandlers."

The Lady Devils overcame the turnovers by shooting lights out from the field, hitting on 23 of 39 attempts and also outrebounding Searcy 19-16.

Searcy got a team-high 15 points from Meredith Webber.