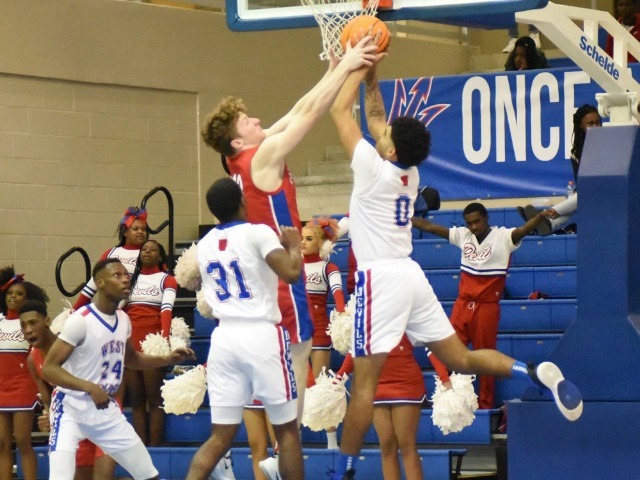 The West Memphis Blue Devils are the 5A-East Conference champions.

West Memphis clinched the East's No. 1 seed in the state tournament via the combination of its 48-39 victory at home Friday night over Paragould and Marion's 55-53 overtime loss at home to Greene County Tech.

"Winning the conference was one of our immediate goals for the season," said a satisfied West Memphis head coach Marcus Brown. "I'm proud of my team. They represent the city very well."

The Blue Devils (21-4 overall, 11-1 in the 5A-East) have secured their state tournament fate. They will play their first-round game on March 3 in Russellville at 5:30 p.m. against the fourth-place team from the West, which looks like either Alma or Beebe.

Until then, the Blue Devils have two more regular-season games, and Brown said his team will approach those games with a win-first initiative.

"It's tune-up city baby," said Brown. "It's all cylinders go. We can't look at them any way else. We're focused on the next game and that's Tuesday night at Greene County Tech. We're pulling into Tech to take care of business and then on Senior Night we want to send our seniors out on a winning note."

After Brown's team humiliated Paragould (1-21, 0-12) last month 79-23 using only his starters for the first five minutes, the Blue Devil boss decided to give his starters the night off.

The starting five didn't even hit the floor against Paragould.

Thus, the score was way closer than it would have been otherwise.

"I knew playing it the way we did it would be a little bumpy," Brown stated. "But we did this with the mindset of getting some kids ready for the future."

The league championship is the second in the last three years for Brown. West Memphis' only remaining goal is to win the state, where the Blue Devils will be among the favorites along with host Russellville, Jacksonville and Hot Springs, all of which will be the No. 1 seeds from their respective conferences.

"It's all business from here on," Brown added.

With a starting lineup of seniors Jamaul Crayton, Deon Williams, Xavier Warren and Kyalan Sykes hooking up with junior Kaleb Burnes, the Blue Devils darted out to a 19-10 first quarter lead.

From there the play got choppy, but still the home team led 26-19 at halftime.

Even with leading rebounder Chris Moore and company on the bench, the Blue Devils still outrebounded Paragould 25-17, making it 23 games out of 25 that they have won the battle of the boards.

The closest the Rams got was six points at 42-36 with 1:54 to play in the game after a three-pointer from Carter Starling, but the Blue Devils got five straight free throws from the combo of Sykes, Akyrahn Hazley and Jaylon Lewis after the team had hit on only 5 of its first 14 free-throw attempts.

Williams led the Blue Devils with 9 points while Sykes tallied 8 and Burnes and junior Tremaine Sims each scored 6.

Paragould got 9 points from Eli Schreit and 8 from Nathan Leer.

The rest of the 5A-East standings see Marion, Jonesboro and Tech all tied for second place with records of 8-4. Marion hosts Jonesboro in its regular-season finale on Thursday night while Tech must win at home against the Blue Devils on Tuesday.