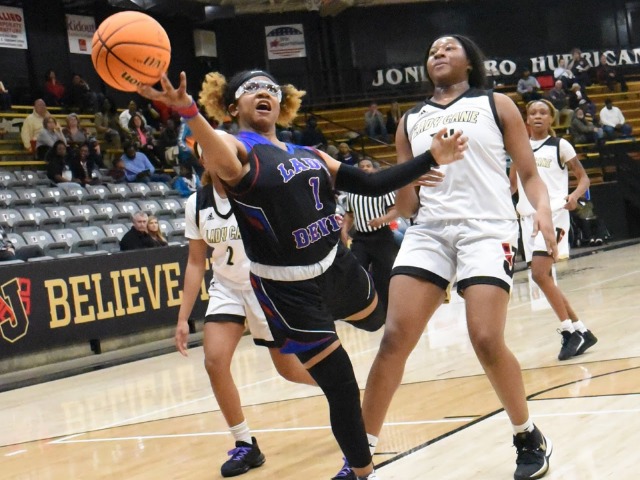 Coming off a tough loss last week at home to Nettleton, the West Memphis Lady Devils could have brewed themselves further trouble here Tuesday night taking on the dangerous Jonesboro girls.

But ninth-grade guard Janiyah Tucker and senior reserve Jamee Gholson would have none of it.

The twosome combined for 38 points Barry Pruitt Hurricane Gymnasium to lead the Lady Devils to a 57-54 victory.

A loss by West Memphis would have created a three-way tie for second place in the 5A-East Conference. But now the Lady Devils (20-5 overall, 9-2 in the conference) own second place all to themselves, one game ahead of third place Mountain Home, with three games to play.

It also kept them just one game behind first-place Nettleton in the standings. The Lady Raiders still have another game left against Mountain Home, the team which gave them their only conference loss.

West Memphis head coach Shelia Burns couldn't hide her satisfaction with the grind-it-out style with which her club employed at Jonesboro.

"That was a huge win," she said. "We needed it to stay alive in the conference race. We made all the plays down the stretch."

The rookie Tucker was matched up against Jonesboro's star senior, Destiny Salary, the University of Tennessee signee. The 5-foot-3 Tucker guarded Salary for most of the game despite giving up eight inches in height.

Although Salary was a factor, leading her team with 19 points, it was Tucker who got the better of the match-up, as she led all scorers with 20 points, 7 of which came in the final 1:36 of the game.

But Tucker had lots of help from Gholson, who scored a career-high 18 points.

"That was Jamee's best game all season," said Burns.

The West Memphis girls also overcame a dismal start from the free-throw line, hitting on just 5 of their first 15. However, they sank 5 of their final 6, including four straight from Gholson, to cinch the outcome.

The back-and-forth affair looked to be swinging Jonesboro's way past the midway point of the fourth quarter as the Lady Hurricane (13-10, 7-4) took a 45-42 lead on a three-point play from Salary.

But West Memphis' 6-foot-3 senior center, Tiera Bradley, who had been held scoreless through the first three quarters, was able to receive the ball deep in the post and she contributed two straight baskets to go along with a layup from Tucker to give the visitors a 48-45 lead with 1:36 to play.

It was a rough go for the Lady Devils with leading scorer, senior point guard Aryah Hazley held to just 5 points for the game.

"(Jonesboro) was playing (Hazley) very tight all night," said Burns. "She never was really able to get in the game. She needs to learn how to move without the ball in situations like that. She's liable to see that a lot from here on out."

With time winding down, the Hurricane trimmed the West Memphis lead to 55-54 on a three-pointer from Salary with 1.7 seconds left.

Gholson was fouled on the inbounds play and she calmly sank both free throws to keep Jonesboro at bay.

Burns promoted ninth-grader Clemisha Prackett of Wonder Junior High and the rookie's debut was successful as she contributed 8 points to the cause. Bradley scored all 6 of her points in the final quarter.

Jonesboro also got 15 points from Ereauna Hardaway while sophomore Destiny Thomas scored all 11 of her points in the second half.

The Lady Devils still have a home game left on Friday night with Paragould and a road date at Greene County Tech before the biggest game which could decide second place, at Lehr Arena on Feb. 28 against Mountain Home.