BLUE DEVILS ALL BUSINESS IN KNOCKING OFF TECH 71-64 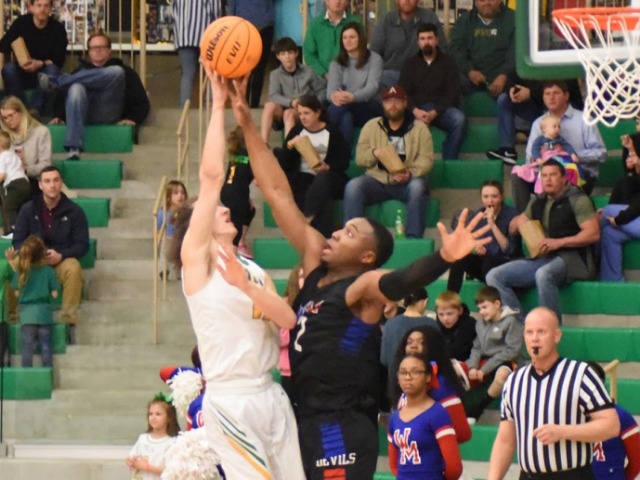 On the dry erase board in the visiting locker room, West Memphis head coach Marcus Brown listed his team's objective in descending order on Tuesday night.

The Blue Devils checked off all the boxes with a 71-64 victory at Greene County Tech.

Already having clinched the 5A-East Conference championship, Brown was emphatic last week with his intentions on the final week of regular-season play.

Play to win and tune up.

The Blue Devils were indeed all business against Tech.

The second box was checked by limiting the normally hot-shooting Techsters to 6 of 19 shooting from three-point range for 32 percent.

"The ball movement was tremendous all night," said Brown aftwards, after watching his junior point guard Jordan Mitchell leave Tech spellbound with 5 assists to go along with 17 points.

Greene County Tech also was limited to 3 points in transition all night, which checked off box No. 6.

"Our offense clicked all night. I was very pleased," said Brown. "We ran our stuff well all night. Our ball movement was very good, which we made sure to write on the board."

The Blue Devil depth just wore down the Eagles.

West Memphis placed four players in double figures with Mitchell leading the way. Senior guard Kylan Sykes, on the strength of four three-pointers and four-of-four shooting from the free-throw line in the final minute, was also key with 16 points.

Senior forward Chris Moore tallied only 12 points, but he cleaned the boards for 17 rebounds. Perhaps the biggest contribution came from senior Akyrahn Hazley, who provided 13 points and 8 rebounds off the bench.

"We're nine, 10 deep," Brown proclaimed. "We're getting production from a lot of folks."

Greene County Tech's high-scoring guard, Zane Butler, who was held to just 4 points in a 65-36 loss at West Memphis last month, sizzled the nets for a game-high 24 points on Tuesday night.

After Butler hit his first shot of the night, he proceeded to miss his next one, which then led to two turnovers.

After sitting for a few minutes, Butler returned to the game and then missed two shots the rest of the night.