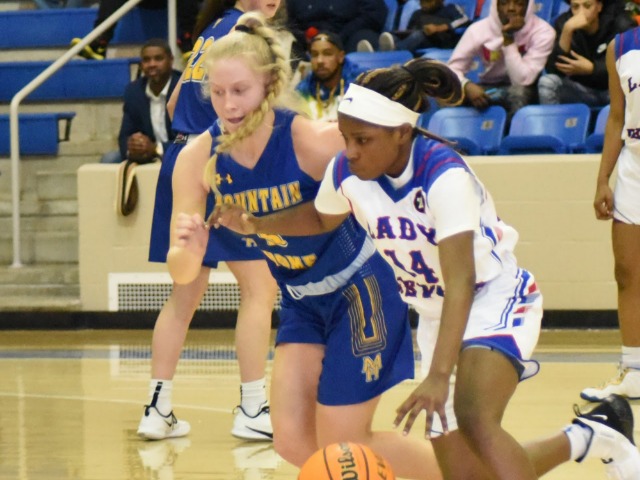 The West Memphis Lady Devils erased whatever angst that had built up over the last few days by defeating Mountain Home 44-30 Friday night at Lehr Arena.

After losing 70-56 at bottom feeder Greene County Tech on Tuesday night, costing the Lady Devils a full share of first place in the 5A-East Conference, all of the disappointment seemed to fade when the final seconds ticked off against Mountain Home.

As freshman guard Janiyah Tucker dribbled off the final 30 seconds with no resistance from the Bombers, the crowd at Lehr Arena gave the Lady Devils a rousing standing ovation.

Still, it is considered quite an accomplishment for the squad under head coach Shelia Burns, in her 24th season at the helm. Burns missed last season due to a brain aneurysm, but returned this season to lead the team to the top of the heap.

"I feel better," said Burns. "I've been upset since we lost at Greene County Tech. I was really ticked off. I never thought we'd get beat like that. I've really been stressed for two days.

"I didn't know if we could beat Mountain Home because they are so good. I told the girls maybe I need to be mad at y'all all the time. They really played well tonight."

The Lady Devils will play their first-round game in the state tournament on Thursday at 1 p.m. against Little Rock Christian Academy, the third-place team from the West.

Instead of coming out lax like they did at Greene County Tech, the Lady Devils took it to Mountain Home (21-6, 10-4) right from the start.

On the first three possessions of the game, Burns was intent on feeding the ball inside to senior center Tiera Bradley. On her first two touches she was called for traveling, but it was clear that Mountain Home's Anna Grace Foreman was not strong enough to stand her ground.

On the third possession, Bradley scored easily, for the first points of the game, and it was on for the West Memphis girls.

The hosts only trailed for less than one minute in the second quarter.

West Memphis seized control of the game with 3:48 left in the third quarter when freshman Clemisha Prackett, who scored 6 points, stuck back a missed shot to ignite a 9-0 Lady Devil run to close out the stanza.

The Lady Devils put the game away with 4:17 left in the fourth quarter when reserve Cortasia Hollins sank a three-pointer.

Burns' club played perhaps their best game of the season on defense, limiting the Lady Bombers to a surprising 1 for 17 shooting effort from three-point distance.

"Mountain Home is a very good three-point shooting team, but we really got after their shooters tonight," said Burns. "Our defense was so good tonight. I know (Mountain Home head coach Del Leonard) feels like I felt on Tuesday night because they are a really good shooting team."

Mountain Home, which got 14 points from Kate Gilbert and 6 from Leah Jackson, outrebounded the Lady Devils 21-20, but the West Memphis defense forced 15 Mountain Home turnovers.